Oplotnica, once known as the White Town, is a treasury of unique natural and cultural experiences. Oplotnica Gorge and chizlakite rock are just the tip of its wealth.

Oplotnica is a small town that is highly connected with the wine-growing and agricultural countryside and is a treasury of unique natural and cultural experiences. Statues of Pagan gods Jupiter and Mithra testify of the former extensive White Town which sank, according to the locals. 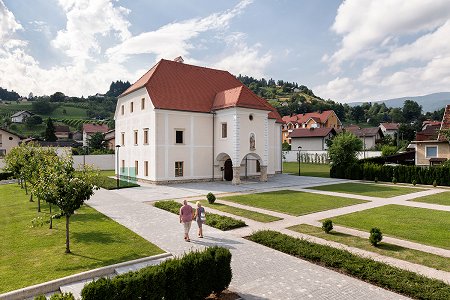 Oplotnica Mansion is also called the Žiče Manor, as it was previously owned by the monks of the Žiče Charterhouse. The beautiful building next to a small park and an old laundry is a monument with some of the most beautiful specimen of the Baroque stucco far and beyond. Also the foundation of the extraordinary Church of St. John the Baptist is associated with the Carthusians, based on the time it was built and its name. An authentic image of the Middle Ages is presented by the open-fire »black« kitchen at Church of St. Barbara.

Luxurious water sources, especially the wild Oplotnica stream, have amidst the low-lying Pohorje forest, which boasts with growing numbers of deciduous oaks and beeches and exquisite wood treasures, carved a narrow gorge into the rock and were running at least 30 sawmills and mills, the last of which stopped operating only in the 1990s of the previous century. A strong connection with nature is expressed by the people of Oplotnica as they still continue to walk into the gorge today. However, nowadays they are looking for relaxation and experiences for children. They set up the Educational Trail of Oplotnica Gorge.

Ceslak is a special feature of Oplotnica - a small place that would be nothing special if it were not for the rock that cannot be found anywhere else in the world; the magmatic plutonic rock of the greenishly shimmering chizlakite, which is related to tonalite and granite.

The Park and the Old Laundry of Oplotnica

The open-fire »black« kitchen at Church of St. Barbara

Our website uses “cookies” to distinguish between visitors and to perform website use statistics. This allows us to improve the page constantly. Users who do not allow our website 'cookies' to be recorded on their computer, will not be able to use all the functionalities of the website (video, comment on Facebook, etc.).Cookies are small files that a website that you visited records on your computer. The next time you are visiting the same site, the system can recognise you.

We use cookies to provide a better user experience. By continuing, you agree to their use.
Accept and continue More information